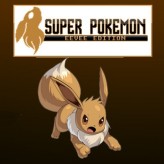 Play a retro styled Pokemon game with your classic RPG adventure formula in this awesome fan-made game. Use your special Eevee and stop the apocalypse in Super Pokemon Eevee! Use your Eevee to change into various forms and defeat the Godlike creatures!

Super Pokemon Eevee is a fan made downloadable Pokemon game that is a tribute to the second generation retro Pokemon games. The game features a strategy based (final fantasy style) combat, and an out of this world story involving God-like entities called hypervisors. In this game, you will play as a rookie Pokemon trainer tasked to do the impossible – kill the hypervisors who threatens to end the world. You are given a special Eevee with the uncanny ability to switch between various evolutions at will! The game features many side quests, crafting, and all other retro RPG elements you could think of.

Instructions
Download the zip file, Unzip to a specified folder of choice, and open RPG_RT.exe.
Have fun!

Play Super Pokemon Eevee game online in your browser free of charge on Arcade Spot. Super Pokemon Eevee is a high quality game that works in all major modern web browsers. This online game is part of the Adventure, Strategy, Pokemon, and Download gaming categories. Super Pokemon Eevee has 13 likes from 17 user ratings. If you enjoy this game then also play games Super Mario Bros. and Super Mario 64. Arcade Spot brings you the best games without downloading and a fun gaming experience on your computers, mobile phones, and tablets. New arcade games and the most popular free online games are added every day to the site.