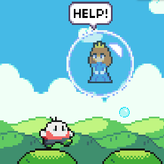 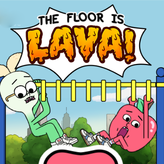 The Floor is Lava: Apple & Onion 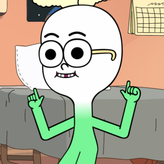 Super Onion Boy is a retro-styled platformer game similar to the traditional Super Mario game series. Save the princess from a terrible monster that kidnapped her. Defeat all the monsters that stand between you and the princess and dodge all obstacles along the way.

Developed by PowerSlash Studios, Super Onion Boy is a game that is similar to Mario in more ways than one. However, this game features many superpowers to collect and use from invincibility, firepower, and super leap, among many others. The game also features a lot of secret places with lots of coins. Collect enough coins to earn extra lives - which is necessary if you plan on breaking the leaderboards.

Don't get fooled by its cute and adorable art style! After the 10th level, the game becomes significantly harder with lots of tricky jumps, challenging level layouts, and strong bosses. If you stick around long enough, you will witness how this little Onion Boy makes even the biggest and meanest enemies cry.

The game features the familiar 16-bit 2D graphics and 8 to 16 bit sound effects that scream classic retro. If you are into the traditional 2D platforming, then this game is definitely worth playing.

Play Super Onion Boy game online in your browser free of charge on Arcade Spot. Super Onion Boy is a high quality game that works in all major modern web browsers. This online game is part of the Adventure, Retro, App, and Mario gaming categories. Super Onion Boy has 1 likes from 1 user ratings. If you enjoy this game then also play games Super Mario Bros. and Super Mario 64. Arcade Spot brings you the best games without downloading and a fun gaming experience on your computers, mobile phones, and tablets. New arcade games and the most popular free online games are added every day to the site.