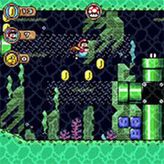 Do you love Bowsette? Then check out this impressive hack based on Bowsette memes around the internet - Super Mario World: The Crown’s Tale! What will happen to the kingdom? Take control of Mario once again and try to find the solution to the problem.

Super Mario World: The Crown’s Tale is a Super Mario World hack with a traditional Mario gameplay and a slightly different story involving Bowsette and the magical Super Crown. The game takes heavy inspiration from the various meme on the internet and features some funny dialogues and scenes. The game starts showing Mario taking a vacation on a faraway island when Toadette suddenly appeared before him with terrible news. The story revolves around the curse of the magic evil spirit that awakened the crown that eventually took over Bowser and Peach's mind making both go crazy. The game features a total of 92 new levels, 112 exits, 25 moons to find, custom graphics and music, and more.