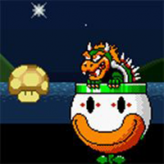 Plumber, Red pants, all too familiar! Super Mario World: Rescues The Golden Mushroom lets you play as the Italian plumber.

Based on SNES's Super Mario World game, our hero awakens in Yoshi’s world and enters a pipe. The problem is, once he enters the pipe, it disappears. Stop Bowser and his plans on ruling the entire mushroom kingdom by stealing the Golden Mushroom, an item with strong powers. Start from stage one, Yoshi’s house is not far away. Jump through dangers as you finish each level with a time limit. Goal Posts still act as a checkpoint to avoid players from lumbering from the start of the game. A 2D action platformer, collect coins, discover hidden areas to unlock more power-ups. Mushrooms, Fire Flowers, and other power-ups are still the key for Mario to advance and finish each level. Stages are colored vividly, and music sets the tone for the levels. Happy and energetic on regular levels and daunting in castles. Lives are shown on the left-hand side, along with coins collected. The Super Mario world feature makes a return where you can store another power-up for future use. Collect Yoshi coins for extra lives and unlimited fun! Super Mario World: Rescues The Golden Mushroom, a combination of nostalgia with some new school flavors. Hoo Hoo! Just what I needed!