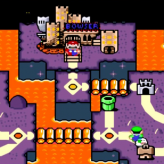 Donald Duck: Quack Attack is a platform game that lets you control one of Disney’s popular characters. Take this fowl on an adventure. Save Daisy Duck as an evil wizard kidnaped her.

Move through twenty-four different levels with four themes, Duckie Mountain, Duckburg, Magica DeSpell’s Manor, and Merlock’s Temple. Dodge enemies and obstacles before you reach the boss stage, defeat each one and move on to the warp room. Bonus levels are included where you must outrun a bear, an evil face truck, a ghost hand, and a statue head. The view can change depending on the gameplay, switching from 2D to 3D. Four lives are given to the player, and it increases if they find particular items. Lives can be lost if Donald is touched twice by the enemy. Unlock new outfits and edit cut scenes to make your Duck look good. Fight your arch-rival, Gladstone Gander, as she tries to go on a journey to save Daisy first. Track down the evil wizard and Daisy, plant an antenna at locations to boost your secret weapon’s powers. Compete with Gladstone, reverse the spells and defeat other bosses. Once you locate the evil Merlock, beat him and save the day. Donald Duck: Quack Attack lets you go on an adventure like never been seen before. Jump and Quack yourself in this adventure!