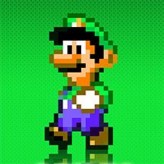 When Mario was busy, Luigi traveled across three worlds to save the princess. Discover the chapter of Luigi’s life in Super Luigi: The Forgotten Adventure! Fight various creatures and help Luigi complete this herculean task alone!

Super Luigi: The Forgotten Adventure is a rom hack for the Nintendo Entertainment System (NES) game Super Mario Bros. The game is about the untold chapter of Luigi’s life when Princess Peach was kidnapped by a robotic creature. The events happened while Mario was away, so the task was for Luigi alone. Can he do it? Only if you help him! Join Luigi as he travel around various worlds and defeat dozens of new creatures to rescue the princess. Have fun!

There have been 27 likes from 33 votes on this game.