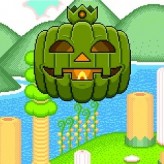 The Dark Menon has drawn the last straw! Avenge your father O-papa and shoot down the evil flowers and their spores in Super Fantasy Zone! Destroy all the enemy generator and proceed to the next level in this colorful side scrolling arcade shooter game!

Super Fantasy Zone is a sequel and the last addition to the Fantasy Zone series. The game is basically a free-moving, side-scrolling shoot ’em up arcade game with colorful and kid-friendly visuals. In this game, you will control Opa-Opa as he fights to avenge his father O-papa and defend the Fantasy Zone at all cost. Collect gold along the way and defeat Menon guardians and enemy generators to proceed to the next level.

Play Super Fantasy Zone game online in your browser free of charge on Arcade Spot. Super Fantasy Zone is a high quality game that works in all major modern web browsers. This online game is part of the Arcade, Shooting, Emulator, and SEGA gaming categories. If you enjoy this game then also play games Super Mario Bros. and Super Mario 64. Arcade Spot brings you the best games without downloading and a fun gaming experience on your computers, mobile phones, and tablets. New arcade games and the most popular free online games are added every day to the site.