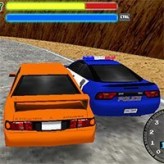 Escape the cops and go on a speedy car chase in Super Chase 3D! Avoid obstacles and outrun the chasing police vehicles in this action packed racing game! Collect nitro fuels and use it to boost your way to freedom! Avoid barricades and try not to get your health too low.

Super Chase 3D is a fast-paced cool racing game, where your job is to outrun the police officers and escape. The track is filled with natural obstacles as well as police barricades that will hinder you down. Avoid the obstacles and try to keep your health up. Use the nitro to escape quickly and earn medals. Super Chase 3D features 5 vehicles to unlock and dozens of map to play on. Collect health packs to replenish your health and Nitro icons to refill your nitro fuel.

Play Super Chase 3D game online in your browser free of charge on Arcade Spot. Super Chase 3D is a high quality game that works in all major modern web browsers. This online game is part of the Racing, Arcade, Driving, and Challenge gaming categories. If you enjoy this game then also play games Super Mario Bros. and Super Mario 64. Arcade Spot brings you the best games without downloading and a fun gaming experience on your computers, mobile phones, and tablets. New arcade games and the most popular free online games are added every day to the site.