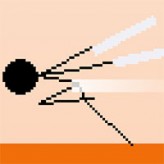 The special episode of the popular Stick Duel is here. Battle against your friend or complete over 50 levels in Stick Duel - Revenge. Grab that weapon and shoot down your opponent before he gets the chance to bring you down.

Stick Duel - Revenge is a fantastic action-packed multiplayer shooting game where you take control of brave stickmen trying to duke it out with an old-fashioned duel. The game features two game modes: Single Player (1P), where you must fight against an AI opponent, and Two-Player (2P), where you can grab a friend and play together in the same computer unit. The rules of the game are pretty simple; both players will ride an advanced hoverboard and take down the opponent by depleting their life points. The first player to defeat the opponent five times will win the game. Weapons will rain down from the sky, and the players should use this opportunity to grab the most potent weapon to blow up the enemy.

Not all weapons are the same, throw a terrible weapon at your enemy, and you might startle to drop the gun he is holding. Keep an eye out for grenade launchers as they deal tremendous damage that can knock opponents out cold.

Play Stick Duel - Revenge game online in your browser free of charge on Arcade Spot. Stick Duel - Revenge is a high quality game that works in all major modern web browsers. This online game is part of the Arcade, Shooting, Fighting, and Ragdoll gaming categories. Stick Duel - Revenge has 3 likes from 3 user ratings. If you enjoy this game then also play games Draw a Stickman - Episode 1 and Stick of Titan. Arcade Spot brings you the best games without downloading and a fun gaming experience on your computers, mobile phones, and tablets. New arcade games and the most popular free online games are added every day to the site.