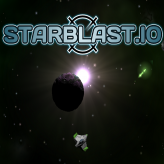 Take control of your spaceship and shoot down asteroids and collect the crystals they hold! Upgrade your ship to buy new ones in Starblast IO! Be an efficient mining space ship or become a pirate yourself in this fun IO game.

Starblast IO is a massive online space shooter game and another IO game created by Neuronality. In this game, you will take control of a space ship and shoot down asteroids to mine the crystals. You can use the crystals to buy new ships, upgrades, and other equipment. Other players will also shoot you down to get your crystals, so be ready to defend yourself. Have fun!

Note: If the game doesn’t load, the server is probably down for maintenance.

Play Starblast IO game online in your browser free of charge on Arcade Spot. Starblast IO is a high quality game that works in all major modern web browsers. This online game is part of the Arcade, Multiplayer, Shooting, and IO gaming categories. Starblast IO has 1 likes from 1 user ratings. If you enjoy this game then also play games Pokemon Fire Red Version and Super Mario Bros.. Arcade Spot brings you the best games without downloading and a fun gaming experience on your computers, mobile phones, and tablets. New arcade games and the most popular free online games are added every day to the site.