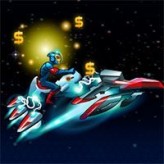 Race through the vastness of space and explore various planets and asteroids as you compete with other races. Become the fastest racer in the universe in Star Cars! Grab hold to your space bike and shoot your competitors to gain a lead and win the race.

Star Cars is a side-scrolling space racing game where you compete with other players from across the universe for fame and glory. In this game, there are four characters you can choose from, each with their own skills and vehicle. Your goal is to race through four different planets and defeat each opponent in a race. Upgrade your damage, handling, armor, and speed to defeat each planet’s boss. Claim the glory of the universe and start racing today!

Play Star Cars game online in your browser free of charge on Arcade Spot. Star Cars is a high quality game that works in all major modern web browsers. This online game is part of the Racing, Arcade, Skill, and Challenge gaming categories. Star Cars has 1 likes from 1 user ratings. If you enjoy this game then also play games Super Mario All-Stars and Mario and Luigi: Superstar Saga. Arcade Spot brings you the best games without downloading and a fun gaming experience on your computers, mobile phones, and tablets. New arcade games and the most popular free online games are added every day to the site.