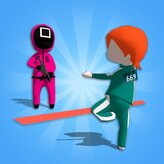 Run and reach the red line without getting shot at in this challenging running game based on the sensational film - Squid Game Fun Race. Move when it's safe and pose when the light turns red. Approach the finish line safely within one minute, or you'll get killed.

Squid Game Fun Race, also known as Squid Game 3D Online, is a single-player game based on the popular K-drama TV series initially released in September 2021. The game follows the rules of the children's game Red light, Green light. In this game, your goal is to reach the end of the path marked by a red line and a massive tree without getting shot at by the guards in red. A giant horrible doll is standing in front of the tree. A red light will be displayed on the ground whenever she turns to look. When the players get caught moving while the doll is looking, the guards will shoot the moving players. You only have sixty seconds before the guards shoot everyone that hasn't reached the line yet—race against time to survive and live another day.

Although you can move freely around, it is advisable not to do so as it will only lengthen the distance you have to travel. Just go straight ahead and stop before the doll turns.

Play Squid Game Fun Race game online in your browser free of charge on Arcade Spot. Squid Game Fun Race is a high quality game that works in all major modern web browsers. This online game is part of the Arcade, Skill, Running, and Mobile gaming categories. Squid Game Fun Race has 1 likes from 1 user ratings. If you enjoy this game then also play games Squid Game 3D - Green Light Red Light Hints and Squid Game IO. Arcade Spot brings you the best games without downloading and a fun gaming experience on your computers, mobile phones, and tablets. New arcade games and the most popular free online games are added every day to the site.