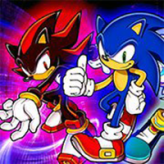 Sonic crashed into the world of Pokemon! Capture the Badniks and let them fight each other in this fun adventure RPG - Sonicmon Fire Red! Encounter 151 Sonic-themed monsters and try to capture them all.

Sonicmon Fire Red is a Pokemon game modification with the base game Pokemon Fire Red Version for the Game Bot Advance (GBA) handheld gaming console. Also known as Sonicmon Pokemon and Sonkémon (pronounced sonky-mon), this game takes the entire Badniks (enemy robots in the Sonic game), as well as team Sonic and all of the protagonist characters, and turn them into capturable Pokemon. Use SokeBalls instead of the usual Pokeballs and go around the unique world collecting all sorts of Badniks. Will you be able to see the rare Sonic.exe monster?