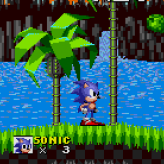 Explore the infamous nearby island called Westside and defeat Dr. Robotnik who has captured the emeralds once more in Sonic the Hedgehog – Westside Island! Play the same classic game with a layer of difficulty and innovation in this awesome game hack.

Sonic the Hedgehog – Westside Island is a challenging and popular ROM hack based on the original Sonic the Hedgehog game. This hack infuses the conventional platforming and running Sonic game paly with thrilling speed. The game features many different stages that was based and meant to be a part of the Westside Island. This ROM hack was created by D.A.Garden and features many modified maps making the game a lot more tougher to beat. The game’s story is set in between Sonic 1 and Sonic 2 games. Have fun!