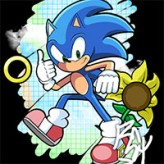 Play one of the most significant ROM hacks in the history of gaming! Test your platforming skills and go on a challenging speedrun in Sonic the Hedgehog @ SAGE 2010!

Sonic the Hedgehog @ SAGE 2010 is a ROM hack named after the Sonic Amateur Games Expo (SAGE) back in the 2010 convention. The hack is based on the original Sonic the Hedgehog game for the SEGA Genesis gaming console, and adds a series of improvents to the original game including a challenging Time Attack mode, and a series of record-keeping abilities like highest score record, ring total record, monitors broken count, hits taken count, and so much more making the game a lot more competitive than the original. The hack was noted as the first ever ROM hack to implement the Retro Channel and SonMP3.

There have been 68 likes from 72 votes on this game.