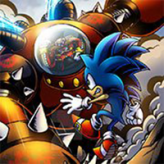 Faster than fast! Take control of the blue hedgehog in his early adventures. Sonic 3 & Knuckles: Epilogue is a retro running game that puts you in control as one of Sega’s most popular characters.

Dr. Robotnik returns to restore the Death Egg, stealing the Master Emerald to fuel its engines limitlessly. Knuckles guard this all-powerful gem. The evil doctor plans to use Knuckles to fight against sonic to further his plans. Run through some familiar enemies as you collect gold rings and get to the end of each level. Obstacles will block your path, and if you hit them, you will lose the rings you collected. You have five seconds to collect them back or lose a life and start over. Bottomless pits and can be jumped over and crossed with lightning speeds. Zones still make an appearance and look like previous games. Choosing one character over the other might show you some differences, but boss tricks and layouts are different for each character adding variety to the adventure. Another difference is the abilities of both heroes. Sonic can jump higher and run faster and has a shield. On the other hand, Knuckles can climb walls and break through blocked doors, adding another dimension to an otherwise great game. Get those boots ready and blaze through the ground, red or blue, you decide!

There have been 10 likes from 13 votes on this game.