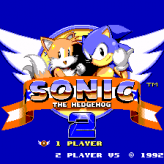 Why not combine two of the best technologies back in the nineties. Combining eight- and sixteen-bit technology for a better platforming time.

Sonic 2: The Hybridization project focuses on the hero’s second adventure, with sprites or character models fitting seamlessly into the levels. With the introduction of Tails as a controllable second player, the possibilities are limitless. In a 2D side-scrolling platform game, you can choose between the two at the game's start. The difference is just cosmetic, as both have identical abilities. In Dual Mode, the second player can join anytime as tails and run alongside Sonic. With three acts and a boss fight at the end of each level, get ready to fight Dr. Robotnik at the end. Levels are distinguished by design; Emerald Hill has loops, and Chemical Plant has boost pads to put Sonic at Top Speed. Collect fifty rings and pass a checkpoint to warp into a special stage, collecting rings while avoiding bombs to exchange for chaos emeralds. Turn into supersonic. With the momentary boost, you are invulnerable to attacks, run faster, and jumps further! Turning into Super Sonic has its drawbacks as you lose one ring per second and will return to normal once all rings are depleted. So ready your running shoes. As with this hedgehog, speed is the name of the game.