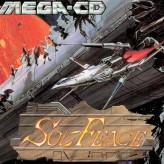 The year was 3300 and humanity faced a threat that they themselves created. Stand in the way of GCS-WT’s grasp over mankind in Sol-Feace! Use your dual cannon weapon and destroy intelligent enemies that are coming your way.

Sol-Feace (also known as Sol-Deace) is a classic horizontal shooter video game released back in 1990 for the Sega Genesis and Mega Drive. In this game, human technology has advanced drastically. In an attempt to unify all humans, mankind develops a supercomputer known as GCS-WT with an active AI technology. However, the AI turned the society into a dystopia and became a powerful dictator. Play the role of two ace pilots Eric Williams and his gunner Misao Hatanaka and defeat the forces of the supercomputer and thwart its plans.

Play Sol-Feace game online in your browser free of charge on Arcade Spot. Sol-Feace is a high quality game that works in all major modern web browsers. This online game is part of the Arcade, Action, Emulator, and SEGA gaming categories. Sol-Feace has 1 likes from 1 user ratings. If you enjoy this game then also play games Sonic Mania Edition and Sonic 3 Complete. Arcade Spot brings you the best games without downloading and a fun gaming experience on your computers, mobile phones, and tablets. New arcade games and the most popular free online games are added every day to the site.