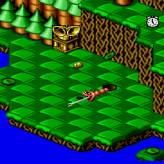 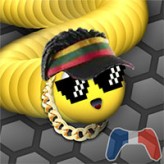 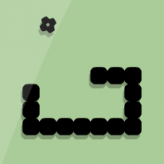 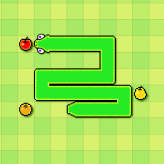 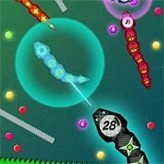 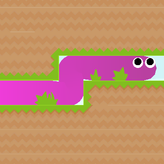 Join the two snakes Rattle and Roll as they try to make their way through eleven 3D isometric levels in this fun old school platformer video game – Snake Rattle n Roll! Make sure that the snakes eat enough or you’ll lose the level.

Snake Rattle n Roll (also written as Snake Rattle ‘n’ Roll) is a classic platformer video game released back in 1990 for the Nintendo Entertainment System (NES), and was later ported to other platforms and consoles. The game features two Snakes named Rattle and Roll (thus the title). The objective of the game is to guide the two snakes through a total of 11 levels while navigating around obstacles. In this game, you also have to make sure that the snakes eat enough “Nibbley Pibbleys” to ring a weigh-in bell located in the level. If you get the bell with-in the minimum weight, then the snake will be allowed to exit the level. Have fun!

Play Snake Rattle n Roll game online in your browser free of charge on Arcade Spot. Snake Rattle n Roll is a high quality game that works in all major modern web browsers. This online game is part of the Arcade, Retro, Emulator, and NES gaming categories. Snake Rattle n Roll has 1 likes from 1 user ratings. If you enjoy this game then also play games Snake IO and Little Big Snake IO. Arcade Spot brings you the best games without downloading and a fun gaming experience on your computers, mobile phones, and tablets. New arcade games and the most popular free online games are added every day to the site.