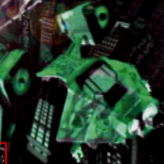 Soar the skies and fly across the neon skyscrapers in this futuristic flight simulation and shooting video game – Skyhammer! Rescue hostages and destroy all hostiles in this cool game.

Skyhammer (previously known as HammerHead) is a futuristic flight simulation and cockpit shooter video game. The game is set in the middle of the 21st century when power-hungry corporations rule the streets. A company named Cytox employed you as their pilot to protect the corporate investments. You must then take a wide variety of missions from the company to improve your standing in the company and serve Cytox. The game features high texture mapped 3D city (that was quite impressive at the time), upgradable combat ship, multiple levels of game difficulty, and more. Good luck!

Play Skyhammer game online in your browser free of charge on Arcade Spot. Skyhammer is a high quality game that works in all major modern web browsers. This online game is part of the Arcade, Shooting, Emulator, and Atari Jaguar gaming categories. Skyhammer has 1 likes from 1 user ratings. If you enjoy this game then also play games Rayman and Alien vs Predator. Arcade Spot brings you the best games without downloading and a fun gaming experience on your computers, mobile phones, and tablets. New arcade games and the most popular free online games are added every day to the site.