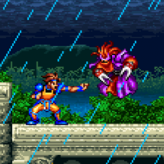 Step into the shoes of the Skyblazer hero and bring back the kidnapped sorcerress. Find magic flasks and use your Skyblazer abilities to destroy evil creatures and smite all your foes.

Skyblazer is an action platformer game published by Sony Imagesoft back in the early 1994. In this classic game, you will play as the Skyblazer hero in search for the Lord of War named Ashura. Ashura kidnapped the sorceress Ariana for his evil intentions and your goal is to rescue the princess and bring back the balance of the world. The game features a total of 17 levels, dozens of boss fights, and a slightly non-linear gameplay. Most levels features a side-scrolling gameplay, however, some levels include flight mechanic and other gameplay changes.

Play Skyblazer game online in your browser free of charge on Arcade Spot. Skyblazer is a high quality game that works in all major modern web browsers. This online game is part of the Adventure, Arcade, Emulator, and SNES gaming categories. Skyblazer has 2 likes from 2 user ratings. If you enjoy this game then also play games Super Mario World and Super Mario All-Stars. Arcade Spot brings you the best games without downloading and a fun gaming experience on your computers, mobile phones, and tablets. New arcade games and the most popular free online games are added every day to the site.