Shining in the Darkness 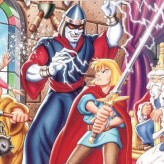 Explore the 3D maze like dungeons with two of your friends and defeat monsters and the forces of darkness along the way in this old school dungeon crawler video game – Shining in the Darkness!

Shining in the Darkness is a classic 1991- action dungeon crawler role playing game released for the Sega Mega Drive / Genesis console, and was the first RPG game to be released for the system. The game was later followed and made popular by the Shining Force series. The game features is a mixed of rpg, dungeon crawler, and turn based strategy battles. On every dungeon you will explore, there will be three characters that you can rescue. Rescuing these characters are optional, but doing so will alter the story. In this game, the main character is charged to find the Arms of Light, rescue the princess and his own father, and finally to stop Dark Sol.

Play Shining in the Darkness game online in your browser free of charge on Arcade Spot. Shining in the Darkness is a high quality game that works in all major modern web browsers. This online game is part of the Adventure, Arcade, Emulator, and SEGA gaming categories. Shining in the Darkness has 1 likes from 1 user ratings. If you enjoy this game then also play games Pokemon Shining Opal and Shining Force II. Arcade Spot brings you the best games without downloading and a fun gaming experience on your computers, mobile phones, and tablets. New arcade games and the most popular free online games are added every day to the site.