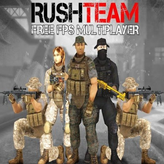 Assemble your squad and push back the bad guys in this online multiplayer first-person shooter. Complete various objectives to win the game in Rush Team! Play on different game modes and bring victory to your team. Satisfy your trigger finger and the smell of sweet victory and shoot to your heart’s content. There can only be one victor after the dust settles.

Bring some friends over and shoot some stuff. Rush Team is a multiplayer game created by Unity. Play as a unit as you push the other Team from gaining objectives in this online shooter. Taking a page out of Counter Strike’s handbook, grab some of your best buds and eliminate the enemies. Create your ID and get into the lobby and find like-minded players. Choose from five different servers and conquer the battlefield from players around the world. Once you have chosen who you want to fight with, grab on a gun and get ready for some fast-paced action. You can buy weapons at the beginning of each round, money you can collect by doing objectives and winning matches. Switch between your primary firearm and you are secondary when you run out of bullets, so you will not lose a step in action. Equip some heavy firepower to take down the enemy team, choose from attacking or defending an objective to enhance your gameplay. Strategize by turning on the chat feature to improve your teamwork. In this fast-paced game, you would not have a single second to breathe. Once the game starts, the action continues throughout the time.

Play Rush Team game online in your browser free of charge on Arcade Spot. Rush Team is a high quality game that works in all major modern web browsers. This online game is part of the Multiplayer, Shooting, and Unity gaming categories. Rush Team has 2 likes from 2 user ratings. If you enjoy this game then also play games Super Mario Rush and Candy Crush Saga. Arcade Spot brings you the best games without downloading and a fun gaming experience on your computers, mobile phones, and tablets. New arcade games and the most popular free online games are added every day to the site.