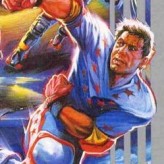 Skate through the city and along the highway in this classic side scrolling sports game. Skate through hazardous part of the town in Rollergames! Punch the bad guys while skating and avoid the man holes!

Rollergames is a classic 1990 game based on the television show of the same name released for the Nintendo Entertainment System (NES). In this game, you begin by choosing one of the three Roller skaters – each representing their own team. The game features many parody as well references including the great great great great grandson of Simon Belmont from Castlevania. Punch bad guys and teach those roller skating gang members a lesson they will never forget. Have fun!

Play Rollergames game online in your browser free of charge on Arcade Spot. Rollergames is a high quality game that works in all major modern web browsers. This online game is part of the Arcade, Action, Emulator, and NES gaming categories. Rollergames has 1 likes from 1 user ratings. If you enjoy this game then also play games Super Mario Bros. and Legend Of The Blob Brothers 2. Arcade Spot brings you the best games without downloading and a fun gaming experience on your computers, mobile phones, and tablets. New arcade games and the most popular free online games are added every day to the site.