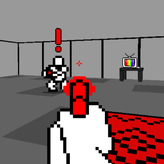 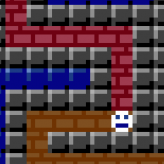 Move fast or you'll get caught! Red Handed is a first-person stealth game developed by BadPiggy, in which you have to get caught. This game is highly inspired by the game SuperHot. Engaging and straightforward, this game would have you asking for a martini. Shaken, not stirred.

Ready for some action-packed shooting? Unholster your gun in this shooting game mixed with some puzzle elements. Red-handed is a Unity-made game that lets you be the spy you always wanted to be. Placed in a dangerous situation, you are placed in the thick of the action with just your trusty handgun and nothing but your wits. Levels are made up of 2D cutouts but do not skimp out on the action. Each level has its clues and what you need to do written on the floor, so you would not feel lost in action. Once the game begins, you are tasked to move from one level to another. Shoot your way out or use your brains so you would not get caught. Enemies come in the same style as you, and they want to do you no good. In this game, you must solve the puzzles by shooting everyone on sight without getting caught. Red Handed also uses limited invisibility, so use this wisely. Walkthrough doors and catch the enemies by surprise. Bullets are also a challenge, so you need to get up close and personal to reach your objectives.

Play Red Handed game online in your browser free of charge on Arcade Spot. Red Handed is a high quality game that works in all major modern web browsers. This online game is part of the Puzzle, Shooting, Action, and Unity gaming categories. Red Handed has 2 likes from 2 user ratings. If you enjoy this game then also play games Five Nights at Freddy's 2 and Five Nights at Freddy's. Arcade Spot brings you the best games without downloading and a fun gaming experience on your computers, mobile phones, and tablets. New arcade games and the most popular free online games are added every day to the site.