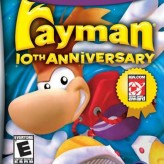 Play two cool Rayman games in one session in this amazing collective game to commemorate the anniversary of the series – Rayman: 10th Anniversary! Play a challenging non-linear platformer video game and protect the world from its sure demise!

Rayman: 10th Anniversary is a compilation of Rayman games released for various gaming platforms including the Game Boy Advance Version. The game is a commemoration of the series’ 10th anniversary after the first release. For the Game Boy Advance (GBA) handheld system, the game features two games: Rayman Advance, and Rayman 3. Battle it out against a horde of Hoodlum soldiers and machinations. Defeat the huge and powerful bosses as you try to save a number of worlds! Complete all levels for the two games and have fun!