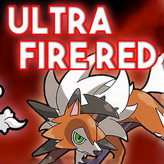 Return to Kanto with a BANG! Enjoy a Pokemon adventure with lots of memes, jokes, and other wacky goodness in Pokemon Ultra Fire Red XD! Create the ultimate Pokemon team as you dive into the nooks and corners of Kanto region once again. Enjoy the new twists and features the game offers and have fun!

Pokemon Ultra Fire Red XD is a Pokemon ROM hack based on the popular game Pokemon Fire Red for the Game Boy Advance (GBA) handheld gaming system. The game is a spin-off of the popular ROM hack called Pokemon Clover. The game features the return of all the Kanto Pokemon, new ones from different generations and regions, and even some of the greatest Fakemon in history. The game follows the story of young Kanye East, as he was reminiscing his precious startup moments when everything seems to be going right. However, the past does not seem to be what he remembers it. Pokemon Ultra Fire Red XD takes a step into the funny side of things with lots of funny names, Megas, and even memes. Will you be able to complete another game in the region of Kanto and become the strongest once again? Good luck!