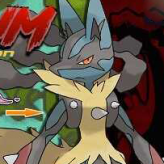 People have been disappearing all over the Derukia region! Investigate this mysterious and creepy phenomenon as you explore the world of Pokemon in Pokemon Titanium!

Pokemon Titanium is a fan-made ROM hack set in the future of the game's franchise. The game focuses on its unique story and features high-level competitive gameplay that is harder than the original game. Pokemon Titanium has many features including new Pokemon, new items, new attacks, a new region called Derukia, new letter system where there is a post office area, a new device called Pokemon Communicator, new events, and many more. The game also features an exciting downloadable content and online competitive game making this ROM hack a cut above most hacks. Will you be able to solve the mystery and become the greatest? Good luck!

Play Pokemon Titanium game online in your browser free of charge on Arcade Spot. Pokemon Titanium is a high quality game that works in all major modern web browsers. This online game is part of the Adventure, RPG, GBA, and Pokemon gaming categories. Pokemon Titanium has 96 likes from 107 user ratings. If you enjoy this game then also play games Pokemon Fire Red Version and Pokemon Emerald Version. Arcade Spot brings you the best games without downloading and a fun gaming experience on your computers, mobile phones, and tablets. New arcade games and the most popular free online games are added every day to the site.