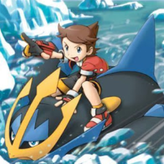 Explore the vast region of Almia and play the role of a Ranger-in-Training at the Ranger School in this fun ARPG - Pokemon Ranger: Shadows of Almia!

Pokemon Ranger: Shadows of Almia is an action role-playing video game released back in 2008 for the Nintendo DS gaming system. The game features a total of 270 Pokémon, including new Pokémon which were not featured in the original Pokémon Ranger game. Unlike other Pokemon Ranger games, Shadows of Almia introduces a new Quest system that allows for mini-missions involving the player. Completing these quests are not essential to the main plot but might provide the player with some cool rewards such as new partner Pokemon, powerful power-ups, and more. The game also features four new Stylers: School, Capture, Fine and Vatonage stylers. Have fun!