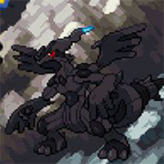 Play the role of a 10-year old boy who is about to start his journey of becoming the next Pokemon Champion in this fun GBA ROM hack called Pokemon Obsidian Black! Go on a grand adventure in the region of Bosha and meet new characters along the way.

Pokemon Obsidian Black is a ROM hack of the popular Pokemon game called Pokemon Fire Red version for the Game Boy Advance (GBA) handheld gaming system. The game features the same core gameplay as the based Fire Red versions but has many gameplay improvements including an entirely new region called Bosha, a new league to challage called Bosha League, 8 new Gym Badges to collect, balanced difficulty, fairy type Pokemon, and so much more.

There have been 54 likes from 68 votes on this game.

Play Pokemon Obsidian Black game online in your browser free of charge on Arcade Spot. Pokemon Obsidian Black is a high quality game that works in all major modern web browsers. This online game is part of the Adventure, Strategy, GBA, and Pokemon gaming categories. Pokemon Obsidian Black has 54 likes from 68 user ratings. If you enjoy this game then also play games Pokemon Fire Red Version and Pokemon Emerald Version. Arcade Spot brings you the best games without downloading and a fun gaming experience on your computers, mobile phones, and tablets. New arcade games and the most popular free online games are added every day to the site.