Pokemon - Mirage of Tales: The Ages of Faith (Zhafira's Prologue) 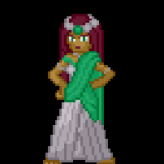 Step into the shoes of Princess Zhafira and embark on a roller coaster ride of betrayal and adventure in this unique Pokemon adventure – Pokemon – Mirage of Tales: The Ages of Faith (Zhafira’s Prologue).

Pokemon – Mirage of Tales: The Ages of Faith is a unique Pokemon game set on the time of olds where there are no PokeCenter, Pokeballs, and Pokedex. The game is separated in three parts, each having their own protagonist and perspective of the same grand story. In this version, you’ll take on the role of Princess Zhafira – the daughter of King Taurian and Queen Zoeya. Zhafira is the princess of the Draconic Empire that has already conquered half of the whole world and is the kingdom responsible for breaking the long time peace.

The game is still a work in progress.