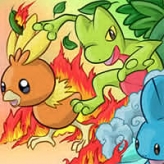 After the events that took place in the Hoenn region, the legendary trinity Rayquaza, Groudon, and Kyogre moved into a new region, the Sierra region. However, the two rival teams Magma and team Aqua followed them all the way to Sierra region. Try to stop them and become a Pokemon Master in this awesome ROM hack - Pokemon Kairos!

Pokemon Kairos is a ROM hack of the Pokemon Fire Red for the Game Boy Advance (GBA). This ROM hack was hacked and released by RuFF in the year 2016. You will play as Pokemon trainer and journey to become a Pokemon Master but ends up being caught up in the feud of teams Magma and Aqua. Try to stop their sinister plans to acquire the legendary trinity! This game features a new team that will rival with teams Aqua and Magma - Team Empyrean! Best of luck, trainer!

There have been 63 likes from 68 votes on this game.

Play Pokemon Kairos game online in your browser free of charge on Arcade Spot. Pokemon Kairos is a high quality game that works in all major modern web browsers. This online game is part of the Adventure, RPG, GBA, and Pokemon gaming categories. Pokemon Kairos has 63 likes from 68 user ratings. If you enjoy this game then also play games Pokemon Fire Red Version and Pokemon Emerald Version. Arcade Spot brings you the best games without downloading and a fun gaming experience on your computers, mobile phones, and tablets. New arcade games and the most popular free online games are added every day to the site.