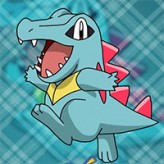 Get yourself a Merry Christmas and treat yourself to a happy New Year in this fun remake of the Pokemon Gold – Start a new adventure in Pokemon Christmas! Spend a White Christmas in Johto region and have fun!

Pokemon Christmas is a ROM hack and a remake of the original Pokemon Gold version. The game is simple graphic hack that adds snow. This is considered as a “Johto Legacy” game. At this game, you will see almost all sceneries covered by snow that will make you feel the Christmas atmosphere in the game. The game also allows you to play and explore the snow-covered Kanto region and meet Red. Aside from the obvious graphical changes, the game also features new characters, new leaders, new rivals, new available Pokemon, new evolutions, practice battle machines, additional prize exchanges, and so much more.

There have been 15 likes from 16 votes on this game.

Play Pokemon Christmas game online in your browser free of charge on Arcade Spot. Pokemon Christmas is a high quality game that works in all major modern web browsers. This online game is part of the Adventure, Strategy, Pokemon, and GBC gaming categories. Pokemon Christmas has 15 likes from 16 user ratings. If you enjoy this game then also play games Pokemon Fire Red Version and Pokemon Emerald Version. Arcade Spot brings you the best games without downloading and a fun gaming experience on your computers, mobile phones, and tablets. New arcade games and the most popular free online games are added every day to the site.