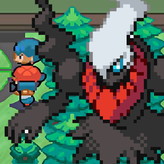 When the bond between Pokemons and their masters was torn, blood and chaos followed. Go on a vengeful journey to defeat Team Midnight in Pokemon Blackened Night! Meet dozens of new dark Pokemons as well as a new evolution for Eevee in this cool rom hack.

Pokemon Blackened Night is a dark-themed Pokemon hack that focuses on the two legendary Pokemons: Dark Rai and Giratina, and the evil team Midnight that’s trying to revive them. The game was based on Pokemon Emerald Version, and features all Generation 4 and Generation 5 Pokemons. The game is set on a new region and has many added features and extra missions at the end of the main story. Although the game is still incomplete, it still features a lot of new things and is quite playable. Have fun!

There have been 32 likes from 37 votes on this game.