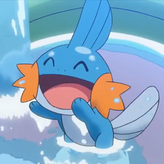 The prestigious Elite Four has been defeated by the powerful mutant Pokemon Mewfour. Go on an adventure and defeat the powerful Pokemon in Pokemon Aqua. Challenge the Elite Four yourself and make your dream come true.

Pokemon Aqua is a fan-made Pokemon hack for the Game Boy Advance handheld system (GBA). The game hack was created by username Magma-Man back in 2014, with the base game Pokemon Sapphire Version. Pokemon Aqua follows the story of a boy who witnessed the destruction of the Elite Four’s base in the hands of Mewfour. The game features an all-new region, a new storyline, remapping of lots of areas, new awesome sound, more Pokemon, and so much more. The game is still a work in progress and might never see completion. However, the game is very interesting and fun and doesn’t move away from the standard Pokemon feeling. Have fun.

There have been 33 likes from 35 votes on this game.

Play Pokemon Aqua game online in your browser free of charge on Arcade Spot. Pokemon Aqua is a high quality game that works in all major modern web browsers. This online game is part of the Adventure, Strategy, GBA, and Pokemon gaming categories. Pokemon Aqua has 33 likes from 35 user ratings. If you enjoy this game then also play games Pokemon Fire Red Version and Pokemon Emerald Version. Arcade Spot brings you the best games without downloading and a fun gaming experience on your computers, mobile phones, and tablets. New arcade games and the most popular free online games are added every day to the site.