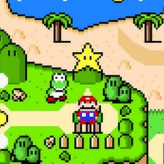 Go on a quest to save Yoshi and Mario's friends from the evil Bowser in a mysterious world! Are you up to the challenge? Immerse yourself in this arcade adventure platformer ROM hack - Phenomenal Mario World!

Phenomenal Mario World is an arcade adventure platformer fan-made ROM hack of the widely-known "Super Mario World" released for the Super Nintendo Entertainment System (SNES). This ROM hack is released in 2016 by "Choconilla". This ROM hack features nine levels. However, these nine levels have eleven exits. Are you clever enough to find all the possible exits? This ROM hack maintains the original gameplay of its predecessors. The goal is also a bit similar to the original one where you beat the evil Bowser and save all of Yoshi's friends which are kidnapped by him. Do you have what it takes to accomplish? Good luck!

Play Phenomenal Mario World game online in your browser free of charge on Arcade Spot. Phenomenal Mario World is a high quality game that works in all major modern web browsers. This online game is part of the Arcade, Retro, SNES, and Mario gaming categories. Phenomenal Mario World has 3 likes from 4 user ratings. If you enjoy this game then also play games Super Mario Bros. and Super Mario 64. Arcade Spot brings you the best games without downloading and a fun gaming experience on your computers, mobile phones, and tablets. New arcade games and the most popular free online games are added every day to the site.