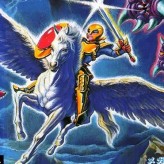 Set out on a dangerous journey as you save Artemis from the evil hands of Typhon. Ride and fly with Pegasus as you shoot down enemies along the way in Phelios. Defeat the mini-boss in each round in order to progress in the game and reach the main boss named Typhon. Good luck and have fun!

Phelios is an exciting classic vertical scrolling shooter video game created by Namco, and was released back in 1988. In this game, you must Guide Apollo as he mounts the legendary winged horse, Pegasus, and fight with enemies on this way to rescue his lover, Artemis. Acquire power-ups that will enhance your shooting power allowing you to take down multiple enemies in a single shot. Avoid enemy attacks as much as possible as you only have three life points in each round.

Play Phelios game online in your browser free of charge on Arcade Spot. Phelios is a high quality game that works in all major modern web browsers. This online game is part of the Adventure, Shooting, Emulator, and SEGA gaming categories. Phelios has 1 likes from 1 user ratings. If you enjoy this game then also play games Sonic 3 Complete and Sonic Mania Edition. Arcade Spot brings you the best games without downloading and a fun gaming experience on your computers, mobile phones, and tablets. New arcade games and the most popular free online games are added every day to the site.