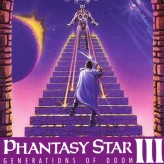 Expose the true root of evil as you investigate a conflict spanning three generations. Create your own destiny in Phantasy Star III – Generations of Doom! Explore the world and choose your actions that will determine your future!

Phantasy Star III – Generations of Doom is a 1991 role playing video game released for the Sega Genesis Drive. The game is a sequel to Phantasy Star II, but the connection of events of the story are not evident. Just like the earlier titles, the game features turn-based battles, and players must explore both the overworld map and the dungeons to progress through the game. Phantasy Star III also had a slower pace and unique medieval fantasy setting in contrast to the sci-fi setting of the other titles making the game the “black sheep” of the series.