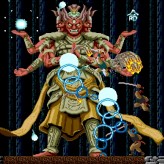 Step into the shoes of a young ninja named Gekkou who lost his father to a half-beast creature. Avenge the death of your father in action-packed game Ninja Spirit! Armed with a trusty katana, you must defeat various creatures and enemies along the way, all for the sake of vengeance.

Ninja Spirit is a classic 1988 action platformer video game released for the TurboGrafx-16 and other arcade platforms. The game is considered as one of the best games for the TG-16 platform as it features great audio, graphics, and challenging gameplay that guarantees a good time. The game is set on an alternate fuedal Japan and features many of the Japanese folklore and myhtical creatures. Good luck and have fun playing the game.

Play Ninja Spirit game online in your browser free of charge on Arcade Spot. Ninja Spirit is a high quality game that works in all major modern web browsers. This online game is part of the Arcade, Action, Emulator, and TurboGrafx-16/PC Engine gaming categories. Ninja Spirit has 1 likes from 1 user ratings. If you enjoy this game then also play games Pokemon Greninja-Z and Naruto: Ninja Council 2. Arcade Spot brings you the best games without downloading and a fun gaming experience on your computers, mobile phones, and tablets. New arcade games and the most popular free online games are added every day to the site.