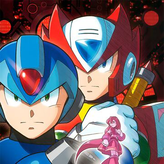 A pair of strong Mavericks named Gareth and Berkana appeared and caused trouble. Join Zero and Megman X as they try to stop them in Megaman Xtreme 2! Defeat the Mavericks and stop their plans of reviving the evil reploids in this action platformer game.

Megaman Xtreme 2 (also known as Rockman X2: Soul Eraser) is a direct sequel to the first Megaman Xtreme game. In this game, Zero becomes fully playable from start. Released back in 2001 for the Game Boy Color Hand held system (GBC), the game takes place between the events of Megaman X3 and X4. Young Iris will help Zero and X as they try to defeat the two Mavericks. Defeat the boss on each stage will earn the player’s character a special weapon.

Play Megaman Xtreme 2 game online in your browser free of charge on Arcade Spot. Megaman Xtreme 2 is a high quality game that works in all major modern web browsers. This online game is part of the Arcade, Action, Emulator, and GBC gaming categories. Megaman Xtreme 2 has 4 likes from 4 user ratings. If you enjoy this game then also play games MegaMan X6 and Megaman X in Sonic 2. Arcade Spot brings you the best games without downloading and a fun gaming experience on your computers, mobile phones, and tablets. New arcade games and the most popular free online games are added every day to the site.