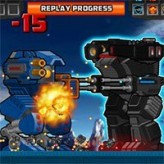 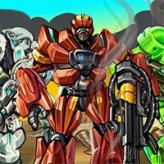 An uninvited alien race have come to invade the earth! Create giant and powerful robots and defeat the invaders in Mega Mechs Assembling! Defeat all waves of aliens and try to complete all levels and unlock all mega mechs!

Mega Mechs Assembling is an arcade shooter game based on classic games like Invaders. However, the game is inspired heavily on the film Transformers and features similar robots to the title. The game is separated into two parts: Robot assembly, and alien invasion defense. In the Robot assembly part, you must drag and drop the matching pieces to its outline. The faster you complete the level, and the more accurately you placed the pieces will determine your robot quality. High robot quality means higher HP. On the alien invasion defense, you must complete dozens of waves of enemies and prevent them from invading the earth. Have fun!

Play Mega Mechs Assembling game online in your browser free of charge on Arcade Spot. Mega Mechs Assembling is a high quality game that works in all major modern web browsers. This online game is part of the Arcade, Puzzle, Matching, and Challenge gaming categories. Mega Mechs Assembling has 2 likes from 2 user ratings. If you enjoy this game then also play games Pokemon Mega and Pokemon Omega Ruby. Arcade Spot brings you the best games without downloading and a fun gaming experience on your computers, mobile phones, and tablets. New arcade games and the most popular free online games are added every day to the site.