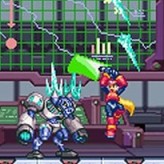 2 Months after the last game, a spaceship crashed and emitted a dark energy. Play as Zero and investigate this catastrophe in Mega Man Zero 3! Complete the main story and enjoy the seven different mini games!

Mega Man Zero 3 is the third installment of the Zero series for the Game Boy Advance (GBA). Also known as Rockman Zero 3, this game follows the same rules and mechanics as its predecessor Mega Man Zero 2. In this game, zero has access to his old weapons; Z-Saber, Buster, and Shield Boomerang, with an addition of a new weapon called Recoil Rod. The game also overhauls the Cyber Elf system by replacing it with Satellite Cyber Elves that can be equipped for a constant benefit.

Play Mega Man Zero 3 game online in your browser free of charge on Arcade Spot. Mega Man Zero 3 is a high quality game that works in all major modern web browsers. This online game is part of the Adventure, Action, Emulator, and GBA gaming categories. Mega Man Zero 3 has 5 likes from 5 user ratings. If you enjoy this game then also play games Pokemon Mega and Pokemon Omega Ruby. Arcade Spot brings you the best games without downloading and a fun gaming experience on your computers, mobile phones, and tablets. New arcade games and the most popular free online games are added every day to the site.