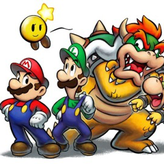 Join hands with your nemesis, Bowser, as you combat the Fawful that threatens the entire Mushroom Kingdom in this fun game - Mario & Luigi RPG 3! Use each of the character's unique abilities and cooperate! Work together to succeed in defeating the Fawful and push them away from the Mushroom Kingdom once and for all.

Mario & Luigi RPG 3, also known as Mario & Luigi: Bowser's Inside Story, is a popular role-playing video game released back in 2009 for the Nintendo DS (NDS) gaming console. The game's story revolves around Mario and his brother Luigi being inhaled into the body of Bowser. Similar to the previous titles, its playing style emphasizes a turn-based battle system focused on timing. Good luck and have fun playing this comedy RPG!

Play Mario & Luigi RPG 3 game online in your browser free of charge on Arcade Spot. Mario & Luigi RPG 3 is a high quality game that works in all major modern web browsers. This online game is part of the Adventure, Action, Mario, and Nintendo DS gaming categories. Mario & Luigi RPG 3 has 3 likes from 4 user ratings. If you enjoy this game then also play games Super Mario Bros. and Super Mario 64. Arcade Spot brings you the best games without downloading and a fun gaming experience on your computers, mobile phones, and tablets. New arcade games and the most popular free online games are added every day to the site.