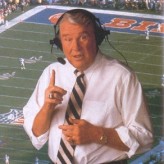 Get ready for some cool football game in this sixth installment of the Madden NFL franchise! Play on different modes and have fun in Madden NFL 94! Observe the action up close as you watch the instant replays!

Madden NFL 94 is a football video game released back in 1993 for the Super Nintendo Entertainment System (SNES). The game was the first game in the series to have an official NFL team license, and therefore be the first game to actually use real players’ names and stats. Madden NFL 94 was also the first game to introduce the “Flip play”, “Play-call mode”, “Pass-catch mode” and “Bluff play” options that later became a norm for the series. Pick a team, start a match and earn the cup in this sports simulation game!

Play Madden NFL 94 game online in your browser free of charge on Arcade Spot. Madden NFL 94 is a high quality game that works in all major modern web browsers. This online game is part of the Arcade, Sports, Emulator, and SNES gaming categories. Madden NFL 94 has 7 likes from 8 user ratings. If you enjoy this game then also play games Madden NFL 07 and Madden NFL 2004. Arcade Spot brings you the best games without downloading and a fun gaming experience on your computers, mobile phones, and tablets. New arcade games and the most popular free online games are added every day to the site.