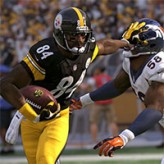 Lead your team to victory by playing smart. Keep on scoring and win the cup in this fun football simulation game from EA Sports – Madden NFL 2003! Create your team, train your roster, and grab that prestigious football cup! Good luck!

Madden NFL 2003 is a football simulation video game released for multiple gaming consoles including Game Boy Advance (GBA) handheld system, PlayStation 2, and Game Cube back in 2002. Developed by EA games and is an entry (14th installment) of the Madden NFL series, the game features John Madden as commentary with Al Michaels and St. Louis Rams on the cover. The game is dubbed as one of the best game in the series,, and definitely one of the best in the genre.

Play Madden NFL 2003 game online in your browser free of charge on Arcade Spot. Madden NFL 2003 is a high quality game that works in all major modern web browsers. This online game is part of the Sports, Emulator, and GBA gaming categories. Madden NFL 2003 has 4 likes from 5 user ratings. If you enjoy this game then also play games Madden NFL 07 and Madden NFL 2005. Arcade Spot brings you the best games without downloading and a fun gaming experience on your computers, mobile phones, and tablets. New arcade games and the most popular free online games are added every day to the site.