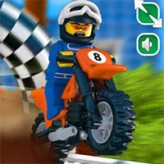 Perform some cool stunts and complete the difficult task! Keep the audience in awe by doing tricks one after another in Lego City: Great Vehicles! Collect coins along the way and use it to unlock new game content.

Lego City: Great Vehicles is a side-scrolling racing/ stunts motorbike/vehicle video game where your goal is to show off your ultimate driving skills. Run and drive on different tracks and with different types of vehicles. The game takes a while to load, but worry not! Even the loading time has a cool LEGO mini-game of brick collecting and boulder-avoiding! The game features a total of 6 vehicles where the first one is already unlocked. Will you be able to win enough golden cups to unlock the others? Good luck and have fun!