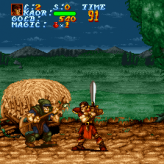 When a corrupt prince wants to harness and unleash a power that contains great evil, heroes must step forth! Be that hero in this side scrolling hack and slash game – Legend! Embark on an adventure to prevent great evil from reigning the land again!

Legend is a classic 1994 side scrolling beat-em-up game with medieval setting similar to the popular game Golden Axe and with similar mechanics to Final Fight. The overall style and gameplay are akin to another SNES game at the time called Iron Commando that was created by the same company. When the tyranical wizard Beldor’s reign was put to an end, his powers were sealed. In the time of peace, a prince desired that power for himself. You must stop another nightmare from happening to the land by defeating the prince.

Play Legend game online in your browser free of charge on Arcade Spot. Legend is a high quality game that works in all major modern web browsers. This online game is part of the Adventure, Arcade, Emulator, and SNES gaming categories. Legend has 1 likes from 1 user ratings. If you enjoy this game then also play games Legend Of The Blob Brothers 2 and Legend of Zelda: Ocarina of Time. Arcade Spot brings you the best games without downloading and a fun gaming experience on your computers, mobile phones, and tablets. New arcade games and the most popular free online games are added every day to the site.