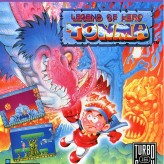 Play the role of Tonma and use a wide variety of weapons to defeat your opponents! Collect money bags and power-ups as you go in Legend of Hero Tonma! Learn the attack patterns of the bosses and evade their attack while dealing major damage to the times when they are most vulnerable.

Legend of Hero Tonma is a multi-scrolling action platformer video game released back in 1989 for the various arcade and gaming systems including the Turbo Grafx-16. The game features similarities to the popular arcade game Ghost and Goblins, however, this game is more forgiving and can be enjoyed even by the casual players as it is less difficult. The goal of the game is to defeat the boss at the end of every area.

Play Legend of Hero Tonma game online in your browser free of charge on Arcade Spot. Legend of Hero Tonma is a high quality game that works in all major modern web browsers. This online game is part of the Arcade, Action, Emulator, and TurboGrafx-16/PC Engine gaming categories. Legend of Hero Tonma has 1 likes from 1 user ratings. If you enjoy this game then also play games Legend Of The Blob Brothers 2 and Legend of Zelda: Ocarina of Time. Arcade Spot brings you the best games without downloading and a fun gaming experience on your computers, mobile phones, and tablets. New arcade games and the most popular free online games are added every day to the site.