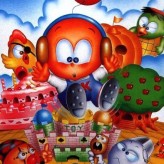 Save the people and your homeland against the Wicked Wizard King in Kickle Cubicle! Turn your enemies into ice and use them to solve the game. Use your ability to freeze the enemies and use the frozen enemies to connect playing fields.

Kickle Cubicle is a puzzle video game created for the arcades in 1988 and then released to Nintendo Entertainment System (NES) back in 1990. In this game, you will control a character with a freezing breath ability named Kickle. The game begins when the protagonist discovers that the Fantasy Kingdom has turned into ice by the Wicked Wizard King and the people of the kingdom are imprisoned in red dream bags. Travel through the four lands of the kingdom and complete the puzzle and defeat the boss in each level.

Play Kickle Cubicle game online in your browser free of charge on Arcade Spot. Kickle Cubicle is a high quality game that works in all major modern web browsers. This online game is part of the Arcade, Puzzle, Emulator, and NES gaming categories. Kickle Cubicle has 1 likes from 1 user ratings. If you enjoy this game then also play games Super Mario Bros. and Legend Of The Blob Brothers 2. Arcade Spot brings you the best games without downloading and a fun gaming experience on your computers, mobile phones, and tablets. New arcade games and the most popular free online games are added every day to the site.