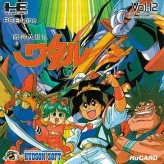 Jump around joyously and defeat various enemies. Then ride on an advanced mech suit and deliver justice to their front door in Keith Courage in Alpha Zones! Buy bombs and get your health refilled to progress further and complete the game.

Keith Courage in Alpha Zones is a wonderful side-scrolling classic platformer video game released back in 1989 for the TurboGrafx-16 gaming console. Also known as “Majin Eiyuuden Wataru”, the game is based on the Japanese animation series of the same name. The game is actually a bit difficult for casual players but it is indeed a load of fun. The game starts like some traditional side-scrolling game, but would later introduce mechanical suits and mechanical monsters that drastically change its gameplay to an action-based.